The choirogrullios is a creature which turns up in the Septuagint, the Greek translation of the Hebrew Bible, but virtually nowhere else in the entire corpus of classical Greek.  This article tracks the efforts of translators to deal with the mysterious beast as it enters Latin and eventually English versions of the Bible.

Genus, the etymological parent of genre, which first appeared in English in the mid-sixteenth century as a logical term ‘under the whiche divers kindes or sortes of things are comprehended’, seems today to have settled into a role largely confined to Trivial Pursuit and Linnean taxonomy, where it represents the rank below family but above species. The classification system which bears his name was hardly Linnaeus’s own innovation — Aristotle starts that ball rolling in the Historiae animalia — but Linnaeus can lay claim to having come up with the binomial nomenclature whereby organisms are identified by a scientific name consisting of genus and species. One of the chief advantages of this naming convention is its universality. Animal names can be ambiguous for translators when languages don't quite map onto one another — in Eco’s well-known example, the Italian topo is commonly translated as mouse, but colloquially it may equally indicate a rat. But by settling on a universal terminology, the precarious practice of translating animal names would seem to have been avoided. The problem, however, is that a universal system works only if it is used universally, and the binomial nomenclature remains largely the preserve of scientists and gardeners. For our lay purposes, we tend to eschew the specificity of genus and species for parochial names, in spite of any ambiguity which might thus arise in translation. Moreover, a nomenclature based on genus and species is not ahistorical. In other words, as our knowledge about the world changes, so do our taxonomies, resulting in reclassifications and name changes. This leaves us once again with the translator’s problem of, What kind of creature was a such-and-such?

I was reminded of this not long ago when I came across a passage by the translation theorist Gideon Toury in an article about ‘translation-specific lexical items’: words which are made up by translators and have no past life in either source or target language. One thinks, perhaps, of a certain type of linguistically inventive modernist text demanding such creative translation: say, Alfred Jarry’s various English translators trying shittr, pschitt, or shikt in order to convey Ubu’s swearword of choice, merdre. But Toury suggests a far older example of the phenomenon:

A possibl[e] […] example from the remote past concerns the replacement of the biblical Hebrew word šafan presumably referring to the animal Procavia capensis) in the Septuagint with κοιρογρυλλιος: There is no way of knowing what the translators had in mind, because this Greek word (if indeed it was a habitual Greek word) occurs nowhere else.

Toury’s spelling is incorrect, as is that of his source, the Hebrew Encyclopedia Biblica.1 The initial κ should be a χ: χοιρογρυλλιος (choirogrullios). Essentially, it boils down to pig-pig: χοιρος = pig + γρυλ(λ)ος = pig.

In case the whole story, like the spelling, was erroneous, I looked up choirogrullios in Liddell & Scott’s Greek lexicon. The list of citations is pretty minimal: four occurrences in the Septuagint and one mention in the Greek Magical Papyri, the collection of magico-religious texts from Greco-Roman Egypt. In addition, Hesychius of Alexandria (probably fifth century ad) includes it in his list of unusual Greek words, and it appears again in the Suda, the vast encyclopedia from tenth-century Byzantium, where it is glossed as ‘υστριξ, ακανθοχοιρος. τουτεστιν εχινος χερσαιος’. The most straightforward translation here would be ‘porcupine, hedgehog. That is, land urchin’. Unfortunately, this makes for a rather self-contradictory definition when we distinguish between porcupines and hedgehogs. Perhaps the Byzantine scribe is deliberately hedging his bets, blurring the edges of an unfamiliar word. Or perhaps, like topo-mouse-rat, the relationships of υστριξ and ακανθοχοιρος to porcupine and hedgehog are not as simple and distinct as we might wish — there’s that drift in our knowledge about the world again. Whatever the explanation, rather than settling beyond doubt the true nature of the choirogrullios, the Suda merely reiterates the tenuousness of the equivalence of animal terms — between one language and another, and across millennia.

The scarcity of other references to the choirogrullios is curious, and Toury’s speculation that it was an original coinage by the seventy-two scholars who translated the Hebrew Bible into Greek is plausible. It would be interesting, then, to see how Saint Jerome treats these passages in his Latin translation of the Bible, the Vulgate. One notable feature of Jerome’s translation is that, unlike the Latin biblical texts which preceded it, the Vulgate Old Testament is based for the most part on the original Hebrew rather than the Greek of the Septuagint. Nevertheless, where the Hebrew has shāphān, Jerome offers a number of conflicting translations, including two which look rather familiar: chyrogryllius, choerogyllius, ericius (hedgehog), and lepusculus (young hare). In Jerome’s translation, then, the choirogrullios has split off into three distinct lines.

Given that Wyclif’s Bible was based on the Vulgate, it should come as no surprise that this mysterious creature should eventually make an appearance in English. So in the late fourteenth century we see:

Interestingly, the detail in Deuteronomy that the prickly cirogrille is different from an irchoun (a hedgehog) is the translator’s invention — not present in Jerome.

It takes Tyndale’s return to the Hebrew to reunify the species under a common name. His Pentateuch of 1530 gives conye in Leviticus and Deuteronomy, providing the basis for Coverdale’s complete English Bible, five years later, to use the same word in all four instances. The King James Version (1611) follows suit with cony.

Meanwhile, the Catholic translators of the Douay Old Testament (1609–1610), pointedly preferring to work from the Vulgate rather than the Hebrew, unsurprisingly preserve Cherogryl, cherogril, Irchin, and leveret. Challoner’s 1750 revision of Douay-Rheims even seems to take a step backwards, giving the Latinised cherogrillus in Leviticus, with the explanatory note,

Some suppose it to be the rabbit, others the hedgehog. St Jerome intimates that it is another kind of animal common in Palestine, which lives in the holes of rocks or in the earth. We choose here, as also in the names of several other creatures that follow (which are little known in this part of the world,) to keep the Greek or Latin names.

Leveret, meanwhile, gets replaced with rabbit. 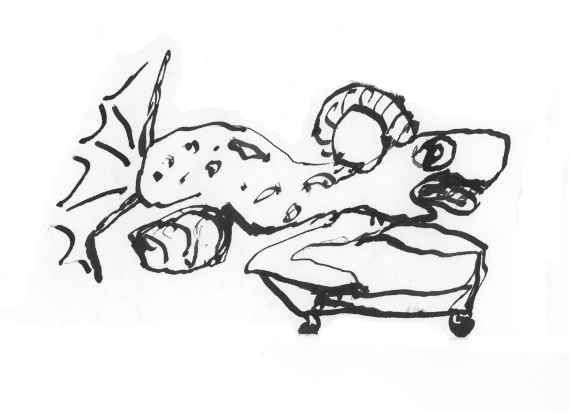 Having come as far as coney, yet with contemporary scholarship pointing towards the hyrax or rock badger (as Cheyne & Black put it, ‘the habits of the rabbit do not suit the references’), it falls to the dictionary editors to square the circle and turn rabbit into badger. The OED, in one of its entries for coney, gives ‘In O.T. used to translate shāphān, a small pachyderm (Hyrax Syriacus), living in caves and clefts of the rocks in Palestine’. In other words, in a minute set of biblical contexts, coney doesn't mean rabbit, but hyrax. Problem solved, and the translators’ blushes have been spared — although this seems a perversely ahistorical solution.

There is still one loose end to follow up — the remaining reference to the choirogrullios in the Greek Magical Papyri. The scroll in which the word appears, held at the National Museum of Antiquities in Leiden, probably dates from the first half of the fourth century ad, several hundred years after the Septuagint. The esotericism of this type of document makes it entirely feasible that the mysterious name is employed precisely because of its inscrutability. The passage in question relates how the temple scribes used a substitution code in their magical writings, lest the uninitiated should be tempted to cast spells without due precaution. There follows a long table of two columns showing the coded ingredients and what should really be used; for example, ‘An eagle: wild garlic’ or ‘Semen of Hermes: dill’. Near the top of the list we have ‘αιμα χοιρ[ο]γρυλλου αληθως χοιρογρυλλου’: ‘blood of the choirogrullios: truly [is] of the choirogrullios’. The Egyptian scribe has hit on the truest statement we can make about this beast, which has so far hopped between five different genera: of all the magical ingredients, the choirogrullios alone is a cipher for nothing but itself. It is a broken link, a signifier left hanging by history, a phenomenon which even the universality of genus-species nomenclature could not eradicate.

Notes
1. Not to be confused with Cheyne & Black’s Encyclopedia Biblica, which spells the word correctly.

Comments on this article

This article has no summary